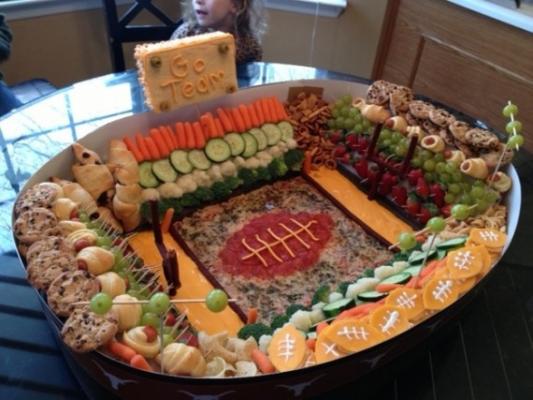 My thanks to the folks at upwave.com

For one day a year, nearly everyone becomes a football fan. Whether the Super Bowl’s draw is the halftime show, the commercials or the game itself doesn’t really matter: Party snacks are the true common denominator. The problem for would-be healthy eaters is that Super Bowl snacks are rarely nutritious. Fortunately, there are some easy fixes that’ll trim calories and bad fats, allowing you to enjoy the game guilt-free. If only we could cut out the bad play calls just as easily, right?

Stuffed mushrooms are a surefire hit at almost any party, Super Bowl or not. Unfortunately, they’re often packed with high-fat ingredients like cheese and sausage. For a lighter, fitter take on the classic, try this recipe, which replaces less healthy options with protein-richGreek yogurt (my new favorite substitute ingredient), low-fat string cheese and lump crab meat. Aside from the delicious flavor, of course, the best thing about these ‘shrooms is the fact that eating five will only cost you 79 calories. Score!

Photo by Anjali Shah, Owner of The Picky Eater

Back in the day, any recipe that featured a layer of sour cream was an instant fave of mine. That’s no longer the case, since I’ve grown older, wiser and less fond of stretchy pants. Of course, traditional seven-layer bean dip is made with stuff like sour cream, full-fat cheese and premade guacamole, and served with processed tortilla chips. This recipe offers a healthy twist on the original with easy, do-it-yourself chips, mashed avocados, veggies and my aforementioned new love, Greek yogurt (mixed with taco seasoning for flavor). Trade up your standard refried beans for nutritionally awesome black beans and you’ve got a real winner on your plate.

Let’s face facts here. Most of the time, melted cheese is what turns nachos into a cholesterol-fest. So instead of saturating your tortilla chips with copious amounts of the beloved dairy product, choose alternate toppings for a leaner, more flavorful approach. This super-yummy (not to mention attractive) option uses quality ingredients like lean ground beef or turkey, roma tomatoes, onions, bell peppers, jalapeños and salsa to create an appetizer that’ll have your guests doing touchdown-style dances of their own. Of course, if you really love cheesy nachos, you can always sparingly sprinkle the dish with a low-fat variety.

Photo by Half Baked Harvest

A Super Bowl party without potato skins is pretty much a sacrilege. This year, trade regular potatoes for brightly colored sweet potatoes! Although regular spuds certainly have their health benefits, sweet potatoes are lower in calories, higher in fiber and vitamin C and are practically bursting with vitamin A. Mixed with zesty chipotle chicken, sharp low-fat cheddar cheese and various seasonings, this fiber-rich dish will surely become an often-requested specialty.

Chili is a staple in many homes during the frosty winter months, and its versatile nature makes it a ton of fun to experiment with. This recipe incorporates the current darling of the foodie world —nutritional superstar quinoa — along with many traditional chili ingredients, such as black beans, diced tomatoes and various herbs and spices. If you’re looking for a leaner, meat-free version of this piping-hot favorite, take this recipe for a spin! Although to chili purists it may seem like a Hail Mary pass, it’ll wind up being a tight spiral right into the end zone of yumminess for everyone.

Buffalo chicken wings are almost as delicious as they are messy. This fan favorite is usually deep fried, though, making the delicacy chock-full of fat and calories — about 479 for only three ounces! This fitter option from Snack Girl is only 240 calories for four or five wings, which is plenty to satisfy your craving without killing your diet. The nutritional difference comes via the preparation: These wings are boiled and baked rather than fried. Top them with the sauce of your choice and serve alongside celery for a cool crunch.

Let me know how your party goes and which of these snacks you liked and served!