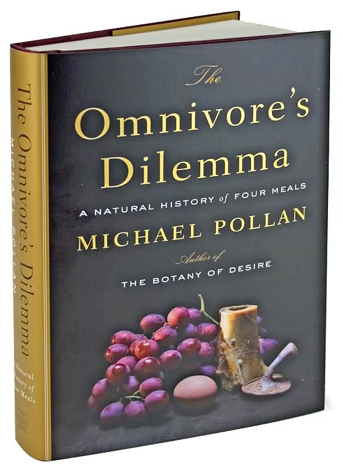 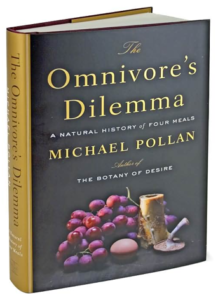 Last week, I put to rest another book. This time it was The Omnivore’s Dilemma by Michael Pollan. I thoroughly enjoyed reading this one and the 400 or so pages flew by yet once again. It’s not an overly technical read, quite enjoyable.  this book is a must read if want to continue here on the planet. I WILL answer the age old question… “what should I eat” once and for all!

The first part of the book is both riveting and appalling, with loads of very interesting stats. Pollan describes how two crops are dissected into their constituent parts to be rebuilt into the tens of thousands of food products lining our store shelves. These two crops are corn and soy. Corn provides starch, soy provides protein, and either or both can provide the fat that make up the myriad products that you see in your local supermarket.

These two crops are so ubiquitous that corn is in at least 25% of the processed foods in the grocery and soy is in around 2/3 of them. That really puts the $3-4 a box for some junk food into perspective. It’s just another mix of corn and soy with some stabilizers thrown in for good measure.

In the first section of the book, we also get an in-depth description of the sex life of corn and Pollan describes the evolutionary changes that maize underwent to become the corn that we know today with its huge kernels and reliance on humans for pollination. We follow a single proverbial bushel of corn to its various destinations, 60% of it into feed for cows, 20% processed into Twinkies and Pop-Tarts, etc. This corn is a particular breed (I think it’s called “#2 Corn,” but can’t recall exactly) that humans don’t typically eat directly. Most of it goes into our industrial facilities to be turned into either animal protein or junk food.

Speaking of animal protein, Pollan gives a small but significant synopsis of the issues of corn-feeding cows vs. grass-feeding them.

One issue is the proliferation of E.Coli 0157:H7 in the guts of corn-fed cows. This is the nasty virulent strain that causes all kinds of ills to those unlucky enough to ingest it. The way it works is that cows are ruminants, intended to eat grass. When fed corn, the intestinal tracts of the cows becomes acidic, killing off all but the most acid-resistant bacteria. These acid-resistant bacteria are the 0157:H7 strain of E.Coli.

So it would seem logical to not feed them corn, but corn-feeding is how we manage to turn out cheap, abundant meat quickly. A corn-fed cow comes to market weight in only 14-16 months, while a grass-fed cow takes several years to come to full weight. But since the high-corn diet makes the cows sick, they have to pumped up on antibiotics and are also fed growth hormones to speed the process.

All of this goes into the food we eat, not to mention the poor fatty acid profile of typical feedlot meat, very high in omega-6 fatty acids, with little omega-3 and conjugated linoleic acids. Luckily, farmers are now selectively breeding cows to tolerate a diet of corn. Whew! I almost thought we might resort to something illogical like putting the cows on grass.

Here are some other interesting tidbits from this section:

First, he explores the industrial organic complex. Think Whole Foods where you can buy organic everything and most of it isn’t from your local food producers. Strawberries from Chile, asparagus from California, etc. The ingredients of an industrial organic meal travel an average of 1500 miles to get to your plate. It may be more healthful than a meal of conventionally grown foods, but that doesn’t mean it’s necessarily more environmentally friendly. Pollan explores the notion of organic TV dinners and the organic farms that sit right next to conventional farms, run by the same people. It is an interesting concept to ponder.

On the one hand, eating organic is more healthful for the eaters and doesn’t douse the land with petroleum-based fertilizers and pesticides. More land under organic control means fewer chemicals in our land and waterways. On the other hand, is an organic Snicker’s any better than a conventionally produced one? We have the power to produce nearly anything organically, but does that make it a good idea to do so? And since organic foods must be trucked or flown in from far away, is it more or less environmentally friendly than eating a locally produced meal of conventional agriculture products?

Pollan’s week at Polyface Farm sounds truly intriguing and enlightening. Polyface is a true pastoral farm. They raise cows, chickens, pigs, turkeys, and rabbits on their 450 acre farm, most of which is wooded. The animals are rotated through the available pasture in a precise dance that ensures each animal gets to eat the food most appropriate for it, all of it grass-based. Joel Salatin, the farm’s owner, actually calls himself a “grass farmer”. He ensures that the grass receives the proper natural fertilization and amount of rest before reintroducing the cows to feed and drop their patties, which the chickens then come behind later and peck through to eat the grubs.

The trees are planted strategically to keep the wind from destroying the pastures and are used as a sustainable lumber operation. Everything about this farm, from the way the manure is turned into fertilizer (through the use of pigs) to the way the chickens are slaughtered (open air, viewable by anyone) is sustainable. Little of anything on the farm is brought in from outside and the entire farming operation is produced on-farm by the work of the sun and the animals coordinated in a natural rhythm. And because Salatin believes in buying local, he refuses to ship his products anywhere but the local Virginia and Maryland markets, which is why Pollan ended up there working the farm. One chapter talks about Pollan’s internal struggles with slaughtering a chicken and turning the chicken waste into yet more fertilizer.

Next up, Pollan investigates vegetarianism and the ethics of eating meat. He cites Peter Singer, author of Animal Liberation, several times. Singer is a noted animal rights activist and vegetarian. But the really interesting part of Singer’s take on animal rights is that he doesn’t disagree with responsible farming of the type performed at Polyface.

Aside from the health benefits of eating properly raised animal products, turning away from the conventional agriculture so predominant in our cheap food culture is friendly to the environment and to our animal brethren.

Finally, Pollan goes on his own hunting and gathering expedition to create a completely (or mostly) home-grown meal. His goals are to hunt a California pig and gather chanterelle mushrooms. He meets a fellow that is well-versed in pig hunting and mushroom gathering that agrees to take him out. After he successfully bags a pig, he goes through all kinds of emotions, ranging from disgust at himself for enjoying it to thankfulness for the pig that became part of the never-ending circle of life.

The description of mushrooms is absolutely fascinating and I won’t give away all of the details here, but thinking of the network growing below the ground, of which a mushroom is only a small little part, is incredible. It is like a brain network within the earth.

All in all, I absolutely loved this book. I give it 5 stars. Sure, not every conventional farmer is like the Iowans he interviewed, but he does a good job of exploring the issues surrounding our food chains, of which we are increasingly removed and which is amazingly opaque.

Understanding where our food comes from, how it is grown and processed, and how it gets to us is the best way for returning to a healthful life.

NOTE:  If you are having your own personal Omnivores Dilemma and would like to know which foods are best for you based on your genetic and racial backround then  a Free Food Finger Print Test and an hour of my time are yours for the asking…. at www.myfoodfingerprint.com  or you can email me and set up an appt with me at ingo@wellness-csi.com

← Prev: Sugar Habit? 3 Steps to Cut Sweets (Mostly) Out of Your Life Next: The Zen Of Eating, There Is A Better Way →