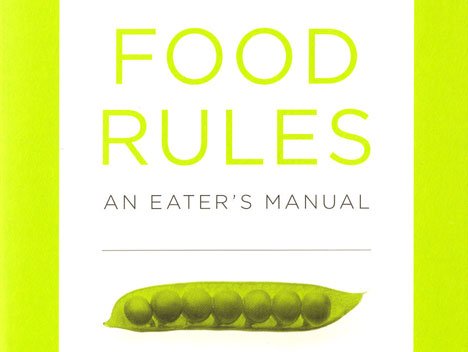 Michael Pollan travelled to London this week to dish up his latest nourishing read, Food Rules – An Eater’s Manual. This collection of home spun dietary advice, that was previewed in the New York Times last year, has now been published in the UK by Penguin. Speaking at the Royal Society of Arts on Monday Pollan put forward the case that actually, with or without the increasingly prescriptive advice of food scientists and nutritionists, we humans have actually got pretty good common sense when it comes to knowing what’s best for us to eat.

Why the low-fat diet made people fat
In his new book, which can be described as a short pithy guide to good eating, Pollan makes the point that in Western culture we have become obsessed with very particular ingredients in our food which have become red herrings of nutritional advice. When fat was demonised in the 1970s it was replaced in food stuffs by increased quantities of salt and sugar to maintain flavour. While people focused on the ‘low-fat’ labels on the packaging they didn’t pay attention to what had taken fat’s place. And guess what… they got fat.

How odd is it that everybody now has at least a passing acquaintance with words like “antioxidant,” “saturated fat.” “omega-3 fatty acids,” “carbohydrates,” “polyphenols,” “folic acid,” “gluten,” and “probiotics”? It’s gotten to the point where we don’t see foods anymore but instead look right through them to the nutrients (good and bad) they contain, and of course to the calories – all these invisible qualities in our food that, properly understood, supposedly hold the secret to eating well.

Photo by author: Michael Pollan  with another of my favorite books he authored. 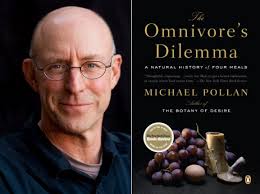 Nutritionism is where surgery was in 1650

The most starkly illustrative point Pollan made about the art of “nutritionism”, as he called it, is that it is such a relatively new discipline:

But for all the scientific and pseudoscientific food baggage that we’ve taken on in recent years, we still don’t know what we should be eating… Nutrition science, which after all only got started less than two hundred years ago, is today approximately where surgery was in the year 1650 – very promising, and very interesting to watch, but are you ready to let them operate on you? I think I’ll wait awhile.

Eat food. Not too much, Mostly plants

Instead of obsessing over individual ingredients Pollan believes we should be paying attention to how our food is grown (preferably locally and organically), the balance of our overall diet (eat like an omnivore), and advises that how we eat has as much importance as what we eat (stop eating before you’re full). Sitting down at a table with friends and family and enjoying good conversation over a good meal is good for the spirit as well as good for digestion.

Long held wisdom about food and eating is still valuable and relevant in today’s culture says Pollan, which is why Food Rules – An Eater’s Manual brings together “sixty-four simple rules for eating healthily and happily. The rules are framed in terms of culture rather than science, though in many cases science has confirmed what culture has long known.”

These sixty-four adages, some written by Pollan and some gathered from conversations with professionals and correspondence with the wider public, are wonderfully catchy and entertaining, they certainly stick in the mind better than any ingredients list on food packaging ever will. Here are some of our favourites, numbered in the order they appear in the book.

2. Don’t eat anything your great-grandmother wouldn’t recognise as food.
6. Avoid foods that contain more than five ingredients
13. Eat only foods that eventually will rot.
15. Get out of the supermarket whenever you can.
20. It’s not food if it arrived through the window of your car.
21. It’s not food if it’s called by the same name in every language (Think Big Mac).
27. Eat animals that have themselves eaten well.
32. Don’t overlook the oily little fishes.
36. Don’t eat breakfast cereals that change the color of the milk.
39. Don’t get your fuel from the same place your car does.

What Food Rules Do You Have at Home? Why not share your thoughts below in the comments section, it may help someone else who struggles with food rules.

Find out the Answer Here

← Prev: Mastering the Art of Mindful Eating Next: How to Kill Your Lame Excuses Forever →